After about a week and a half in Changsha finishing up school applications, I started to get antsy to do some more traveling before school started again. At first I was thinking of going north to Beijing and then Harbin for the Ice Festival.

Unfortunately Harbin just wasn’t possible. I had decided on Harbin too late and the train tickets were all sold out. Or more accurately, I wasn’t willing to spend 2+ days standing on a train without a seat in order to get up to Harbin. Instead of the freezing north, I went South to Yangshuo in the Guangxi Province. This was my first time traveling by myself in China, so ofcourse I missed my train stop, a mistake that extended the travel time by 9 hours.  Beyond that everything went relatively smoothly, I bought tickets for buses and boats with no problem. 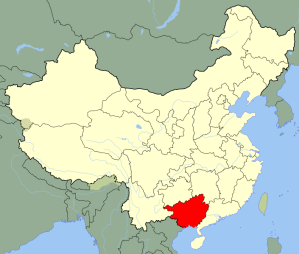 Yangshuo is a relatively small city that in the past decade has become very popular among foreign backpackers, especially rock climbers. The region around Yangshuo is full of large limestone hills. These hills are very famous in China and they are often the subject of paintings and poems.

The highlight of the trip was renting a bicycle and traveling through the surrounding countryside.

I met Ken in Yangshuo and ended up traveling with him for a day. He's from Shanghai and like most Chinese tourists had an enormous camera. He also had a binder of 200+ pages with information on things to do and places to stay in Yangshuo for his five day trip. Nice guy.

I’ll end with an unimpressive, but significant picture. The scene is from the China’s 20 Yuan bill:

Unfortunately the morning I was there it was overcast, though still neat.